The Kavli Prizes awarded for the first time

The Kavli Prizes were awarded for the first time in Oslo  on the 9th of September 2008. His Royal Highness Crown Prince Haakon Magnus led the presentation of the international research prizes to seven of the world’s most prominent scientists in astrophysics, nanoscience and neuroscience. The prize award in each of the scientific areas carries a cash award of 1 million American dollars, donated by Fred Kavli. Each of of laureates also received a gold medal and a scroll.The Kavli Prize was established as a joint venture between The Kavli Foundation, the Norwegian Ministry of Education and Research and the Norwegian Academy of Science and Letters. In his opening speech the Academy’s president, Ole-Didrik Lærum, emphasised the significance of the prize for increased attention to Norwegian research internationally, and how such a prize breaks down barriers between the traditionally closed scientific community and civil society.

The Kavli Prizes will be awarded every second year, starting i 2008.  Their founder is the Norwegian-American businessman and philanthropist Fred Kavli, who was himself present during the ceremony in Oslo Concert Hall. 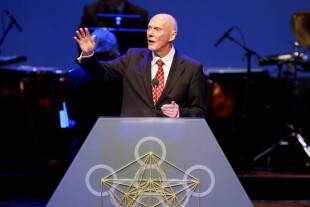 “We are here today to honor and celebrate our scientists – our prize winners – for their work and their contribution to humanity’s splendid journey,” said Fred Kavli, founder of The Kavli Foundation and Kavli Prizes. “Let these prizes be a token of thanks and gratitude for moving us along the path of greater understanding of the human being, nature, and the universe”, said Fred Kavli in his speech during the ceremony. He explained that he had decided to create his own research foundation, the Kavli Foundation, in 2000 because he wanted to make a contribution to positive human development via scientific research, and in order to create greater public understanding of the importance of research.

Seven Kavli Laureates
His Royal Highness Haakon Magnus presented the prizes, which consist of one million American dollars in each category, a gold medal and a diploma, to the following professors: 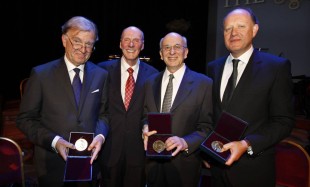 The winners of the Kavli Prize in neuroscience together with Fred Kavli. (Photo: Håkon Mosvold Larsen/Scanpix)