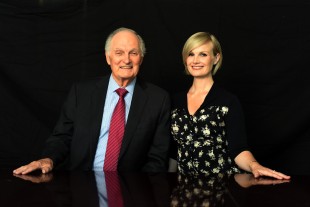 Opening remarks by Anne Borg, Dean of The Faculty of Natural Sciences and Technology, NTNU

Dimos Poulikakos, ETH Zürich:
How to arrest, interrogate and transport viruses in liquids, one at a time

09.15 - 12.00, The Kavli Prize Symposium in Astrophysics at The Norwegian Academy of Science and Letters:

Jochen Liske, University of Hamburg:
The sky is the limit: New megastructures for astronomy

LIGO's recent discovery of gravitational waves from colliding black holes has opened the new field of gravitational wave astronomy: the exploration of the universe using ripples in the fabric of spacetime produced by the accelerations of highly concentrated mass and energy.

We will begin with some history of the ideas underlying this new field:

Sometimes inventions, discoveries or other type of breakthroughs seem to happen out of the blue. On a closer look, however, they are always based on earlier insights and discoveries. Experiences in Scanning Tunneling Microscopy, Stylus Profilometry and Micromechanics represent the main components that laid the foundation for the invention and the development of the Atomic Force Microscope, AFM. Once the AFM was developed its distribution among scientists in a large variety of very different domains was very fast. Atomic resolution, however, was achieved only spuriously very early. Today true atomic resolution by AFM is very well established, but it took seven years to achieving it for the first time. At the same time the attractive forces between individual atoms could be measured  atoms attracting atoms. In cell biology the attraction between molecules is the core element for building their complex and highly sophisticated interaction network. To bind or not to bind is here the essential question as well as for drug development targeting these networks. With AFM those forces between individual molecules can be measure and even the internal binding forces of complex molecules. Those forces can be made use of to manipulate atomic or molecular arrangements to advance Nanotechnology and Nanomedicine beyond imaging.

According to the American skin cancer foundation, there are more new cases of skin cancer than the combined incidence of cancers of the breast, prostate, lung and colon each year and malignant melanoma represents its deadliest form. About 50% of all cases are characterized by a particular mutation BRAFV600E in the BRAF-gene. Recently developed highly specific drugs are able to fight BRAFV600E mutated tumors, but require diagnostic tools for fast and reliable mutation detection to warrant treatment efficiency. We performed the first clinical pilot study based on nanomechanical microcantilever sensors demonstrating the identification of the BRAFV600E single-point mutation in total RNA extracted from surgical samples of metastatic melanoma of different origins and forms (frozen or formalin-fixed paraffin-embedded tissues). The method is faster than the standard Sanger or pyrosequencing methods and comparably sensitive as next-generation sequencing. Processing time from biopsy to diagnosis is below one day and does not require PCR-amplification, sequencing and labels.

The nervous system must be both flexible and robust. Neuromodulatory agents provide a series of mechanisms that allow the short-term dynamics of networks to be altered in response to differing environmental and behavioral needs. At the same time, over months and years, brain networks must maintain robust and stable performance despite the fact that the ion channels and receptors so important for all brain activity are constantly being replaced. We use experimental and computational methods to study how robustness and plasticity at multiple time-scales are achieved by the nervous systems of long-lived animals.

The demonstration of the ways in which the brain is plastic throughout human lifetimes has been transformative for understanding the origins and nature of our personhoodand increasingly, for neurological and psychiatric medicine. After describing our historical awakening to the fact and nature of lifelong brain plasticity, we shall consider how and why plasticity processes are, by their fundamental nature, reversible. The nature of that reversibility has led to a new level of understanding of the origins of the expressions of neurological and psychiatric illness, and has directed us to new approaches for treating them. Our progress in translating this science for human benefit shall be used to illustrate how this science shall result in broad improvements in the quality and security of our lives, across extended human lifetimes.

The brain is the most incredible computational machine imaginable. There are over one trillion nerve cells in the brain, and each cell can make 10,000 synaptic connections with other nerve cells. How are connections wired up during development? The wiring problem is solved sequentially first by forming a basic scaffold of connectivity according to genetic blueprints: strict molecular cues enable growing nerve connections to follow appropriate pathways to their correct target regions. Then, once this basic scaffold of connectivity forms, the exact details of each circuit emerge by pruning and sculpting synapses from the immature pattern of connections. The decision-making process that determines which synaptic connections remain and which are pruned is also genetically specified but in this case requires brain function. Even before birth, the brain generates its own internal neural activity patterns to jump-start the sculpting process. After birth once sensory systems, such as the eyes and ears, become mature enough, experience of the external world takes over to influence brain wiring during developmental critical periods. Neural activity and brain function regulate the expression of sets of genes including several previously thought to act only in the immune system. These activity-regulated genes- including Major Histocompatibility Class I family members and Paired immunoglobulin-like receptor B- are required in neurons for pruning and sculpting synapses during development and they may also contribute to the excessive synapse pruning in Alzheimers disease. Thus, the baby's brain is not a miniature version of the adult, but rather is a dynamically changing structure in which neural activity and experience ultimately select and stabilize essential details of neural circuitry that make each of us different from one another.