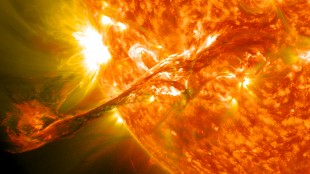 A solar prominence erupting at about 1500 km/s on Aug 31, 2012. The image is a composite of 304 and 171 Å wavelength bands form the Atmospheric Imaging Assembly (AIA) on the Solar Dynamics Observatory (SDO). (Courtesy NASA/SDO and the AIA science team.)

The Sun, an object of worship for early civilisations, is the main source of light and life on Earth and of our space weather, with many subtle effects on our environment. Furthermore, on the Sun we can view in exquisite detail many cosmical processes that occur across the universe in more distant and exotic environments.

This lecture will introduce you to the Sun and its dynamic phenomena, some of which create changes in Near-Earth space whose study was pioneered by Birkeland. The lecture will aim to show how our understanding of many aspects of the Sun has been revolutionized over the past few years by current spacecraft observations and models. It will also describe major puzzles that remain.

The Sun is in the plasma state, the fourth state of matter, which behaves completely differently from the other three states that surround us on Earth (solids, liquids and gases). The main difference lies in the subtle, intimate, nonlinear interaction between the magnetic field and the plasma, described for many purposes by magnetohydrodynamics. Indeed, many dynamic phenomena on the Sun are driven by the magnetic field since, in the outer atmosphere (or corona), it represents by far the largest source of energy.

The interior of the Sun, revealed by solar seismology, possesses a strong shear layer at the base of the convection zone, where sunspot magnetic fields are generated. But a small-scale dynamo is also operating near the surface of the Sun, generating magnetic fields that thread the lowest layer of the solar atmosphere, the photosphere, in a turbulent convective state.

A spectacular set of coronal loops following an eruption on Jan 15, 2012, as viewed at 1 million degrees kelvin in the 171 Å EUV line of the AIACourtesy NASA/SDO and the AIA science team.

Above the photosphere lies the highly dynamic fine-scale chromosphere and beyond that the rare corona at high temperatures exceeding one million degrees K. Magnetic mechanisms for heating the corona (an intriguing puzzle) will be described. One suggestion involves wave motions and another the formation of intense sheets of current where dissipation of magnetic energy is rapid.

Other puzzles include the structure of giant flux ropes, known as prominences, which have complex fine structure. Occasionally, they erupt and produce huge ejections of mass and magnetic field (coronal mass ejections), which can disrupt the space environment of the Earth.  When such eruptions originate in active regions around sunspots, they are also associated with solar flares, where magnetic energy is converted to kinetic, heat and fast particle energy.

Priest has for 32 years been a full professor of mathematics at St Andrews University, where he has built up the Solar Magnetohydrodynamics (MHD) Group of 8 tenured faculty and 21 postdoctoral and postgraduate students.  He had previously been appointed lecturer at St Andrews after doing a PhD with TG Cowling.

When first arriving at St Andrews, he expected to stay 2 years, but fell in love with this beautiful, historic town on the East Coast of Scotland. Each summer, his creativity has been re-stimulated by visiting the USA for research with colleagues such as Terry Forbes or Dana Longcope.

As an applied mathematician in solar physics, he has broad interests in science, as well as communicating the philosophy, vitality and importance of science to a wider public. He is also committed to supporting and mentoring young researchers and expanding public awareness.

He has been on many national and international committees including: being co-chair of PPARC's Science Committee, responsible for the UK astronomy and particle physics research programme; being on the European Space Agency's Space Science Advisory Committee. Currently he is chair of the Fachbeirat for the Max-Planck-Institute for Solar System Science in Goettingen.

He has written over 460 journal papers, edited 15 books and written 4 research monographs notably Solar Magnetohydrodynamics (1982), Magnetic Reconnection (with T Forbes, 2000) and Magnetohydrodynamics of the Sun (2014). His main topics have been magnetic reconnection, coronal heating, solar prominences and solar flares.

In 2012 a new section was added to the traditional Birkeland Lecture, an introductory lecture under the thematic umbrella "Science and Innovation". This year's lecture "From the North Sea to Mars - high-voltage plasma applications" will be given by Brage W. Johansen, CEO Zaptec  AS.