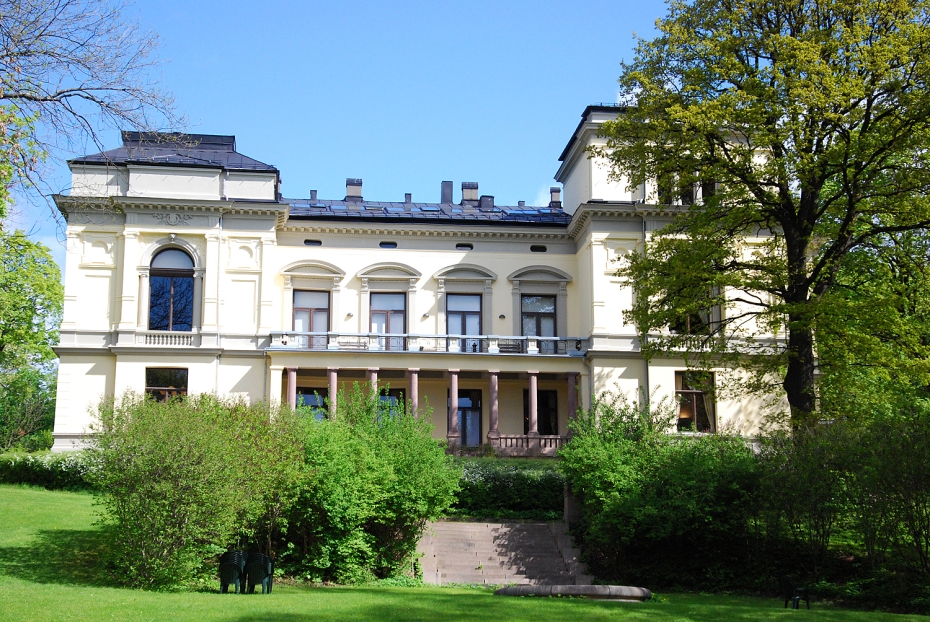 The house of The Norwegian Academy of Science and Letters was commissioned by Minister of Labor Hans Rasmus Astrup and designed by architect Herman Major Backer. The house was built in 1887. Backer designed several of the villas on Drammensveien and was referred to as the architect of Drammensveien.

From 1887 to 1898, the Astrup Family Villa at Drammensveien 78 was an important meeting place in Norwegian cultural life. In 1909, the scientist Waldemar Chr. Brøgger started a crowdfunding to secure a "house of science" in Norway, and thanks to the fundraising and a generous gift from Astrup's daughters Ebba and Elisabeth, the Academy of Sciences and Letters was able to move into the house in 1911.

The building is on Oslo City’s yellow list of heritage (Byantikvaren), as a cultural monument worthy of protection. In 2019, the process of preserving parts of the building began in collaboration with the Directorate for Cultural Heritage (Riksantikvaren).

In 2021, the painted vines on the second floor were cleaned and restored. The restoration was carried out by Steinar Onstad. He has previously restored painted wall columns and wall surfaces in the tapestry hall. On the ground floor, wall panels in the cloakroom have been painted and marbled.

For the Academy's gardens, a professional report regarding the trees was presented by arborist Tom Shepherd, and in the autumn the Academy implemented recommended measures.

The Norwegian population increased in the second half of the 19th century and the landscape around the capital was expanded with tenements and year-round villas. Some of the richest citizens moved to Drammensveien. Christiania developed into a modern capital.

Few changes in the villa
The house was much more than just a private residence. Hans Rasmus Astrup, his wife Augusta Elisabeth and their children used the ground floor as their living quarters. The second floor had a representation room and Astrup's office, and the basement was the servants’ quarters. The exterior is almost unchanged to this day, as are large parts of the ground and first floor.

Art in the interior
The largest of the lounges on the first floor, the Gobelin room, is named after the four tapestries that decorate the wall. The tapestries, which are made to illustrate the four senses, are partly embroidered and partly painted, by the Swedish painter Mårten Eskil Winge and his wife Hanna Winge. Mårten Eskil Winge has also decorated Blomsterhagen (The flower garden), the salon facing Drammensveien. Arne Fladager has painted the vines in the walls of both Blomsterhagen and The Kavli Lecture Hall (the lecture hall).

Astrup’s political career
Astrup moved back to Norway and Christiania after many years in Spain and Sweden. He was considered a competent and visionary businessman. Shortly after his return to Norway, he was persuaded to enter the world of politics.

A meeting place
Hans Rasmus Astrup gathered politicians, scientists, artists and businessmen in the house on Drammensveien. He invited authors such as Henrik Ibsen, Jonas Lie and Bjørnstjerne Bjørnson, and other well known guests were W. C. Brøgger, Johan Sverdrup, Ossian Sars and Ernst Sars. Many important conversations between key people took place in the house, which was an important meeting place for Norway’s cultural and political elite, and can thus be said to have left mark for the posterity.

"In the good ten years from the move in 1887 to Astrup's death in the beginning of 1898, Astrup and his wife made the Academy House a festive gathering place, and he worked consciously towards the goal that tolerance and mutual understanding would replace blind party hatred. It had horrified him to notice that many right-wingers and left-wingers in Norway were extremely reluctant to have any social contact with each other, and hardly spoke to each other. " - Francis Bull, a Norwegian literary historian.

Fundraising
In 1911, the The Norwegian Academy of Science and Letters moved in to the building. The house was sold to the Academy at a very reasonable prize, by Astrup's two surviving daughters Ebba and Elisabeth, and a private fundraiser that made it possible for the Academy to take over the house. Since then, the Academy has upheld the tradition of using the house as a meeting place for people and ideas.

The house today
Seen from the outside, the house is as it was in 1887. The lounges and bedrooms downstairs have been converted into offices and meeting rooms. The Abel room on the ground floor, which was once the Astrup family's private lounge, is now a meeting room. The first floor serves as a venue for the Academy’s own events and can also be rented. An elevator was installed in the house in 2017, making the house universally accessible. The Lecture Hall was modernized in 2018 and was renamed The Kavli Hall after Fred Kavli. The audiovisual equipment was purchased after a gift from the Bergesen Foundation. The neighbouring building, Stallen, is today used as offices for the administration.